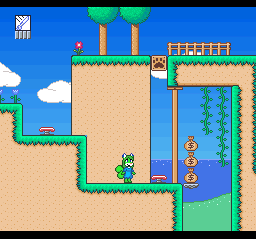 Nova the Squirrel 2 is in development for the SNES. It is planned to have a stronger storyline focusing on Nova as well as a unique mouse named Maffi. This game intends on taking advantage of the better graphical capabilities of the SNES. I often post about updates on Twitter.
GitHub repository 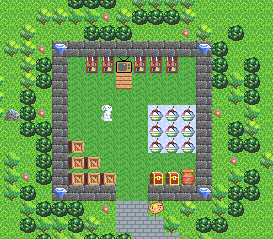 Tilemap Town
See its page for more information and a link to play on the development server!
GitHub repository

Nova the Squirrel is a platformer game for the NES that draws inspiration from a lot of games I enjoyed as a kid. It's the biggest project I have ever finished and I'm very proud of it. It features ability copying and focuses on interesting puzzle mechanics.

Get it on itch.io!
Get it on GameJolt!
GitHub repository

Double Action Blaster Guys
A platformer very similar to FHBG except back on the NES and with up to two players. Includes over 25 enemy types, a large assortment of block types, 52 levels and three or four different level goal types as well a level editor.
Download (with source, 2014)
Download (old version, with source, 2013)
GitHub repository
Get it on a cart (along with Sliding Blaster, NES Life 64x32 and other peoples' NES stuff

Sliding Blaster
An overhead shooter game for NES inspired by Ballmaster2, with a level editor and 10 stages, and co-op ability. Also supports the SNES mouse on Nintendulator.
Download (with source, 2014)
GitHub repository 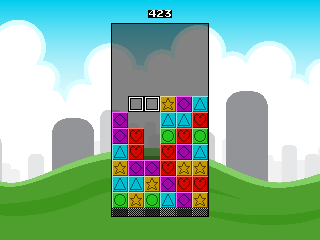 NetPuzzleArena
Net Puzzle Arena is the spiritual sequel to freepuzzlearena. It will be a collection of cross-platform action puzzle games with online multiplayer. The primary focus is making a way to play a mostly accurate version of Puzzle League online. Work in progress hasn't been worked on in a long time though, as other projects (like Nova the Squirrel 2) take priority.
GitHub repository 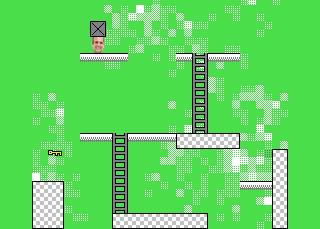 Forehead Block Guy SDL
A C rewrite of my earlier Forehead Block Guy for NES that I wrote in 2011, specifically for the nD handheld console that turned out to be vaporware. It's better than the NES version and introduces stages that require collecting a certain number of Doritos to finish. Unfinished and probably won't come back to it.
Download (with source)

NES Life
Very fast implementation of Conway's Life for the NES with a 32x32 grid. Originally I wanted to reverse engineer how Video Life manages to be so fast but then I decided to just try and make a Life that takes advantage of how much more space you get in an NES cart.
Download (with source, 2013)
GitHub repository

NES Life 64x32
An implementation of Conway's Life for NES that's slower but has twice as big of a grid, and lets you choose between different rulesets.
Download (with source, 2014)
GitHub repository

Forehead Block Guy
My first "real" game I released online and programmed completely by myself when I was 15. Not great, but provided for curiosity's sake. A Game Boy Color remake was started on, but paused since I don't think it's really a great fit for that platform. See also the SDL version.
Download (with source, 2011) 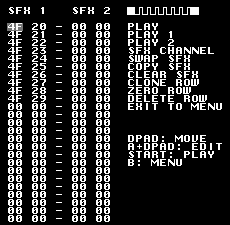 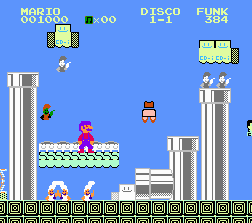 Mario Funk
A really old hack of Super Mario Bros that changes all the levels, lots of palettes, graphics and even the music. There's a mix of a disco theme with Youtube Poop theme and this was the first game of mine to have flying cheeseburger enemies.
Download (IPS patch, 2008)

Joshcraft 83+
This is a very simplistic tile-based platformer for the TI-83+ and TI-84+ graphing calculators where you can walk around and place/remove tiles on a 48x16 map, which you can save or load to 9 slots. Oh, and you can draw up to 16 of your own block types.
Download (with source, 2012)